I’ve studied over a century of brutality at this prison farm in Sunflower County. I’ve realized that the only way this place will be made constitutional is to shut it down and start over. The reforms began by the federal courts in the 1970s are a memory of the past, as the state of Mississippi continues to neglect its prisons.

[The] Prison has always been violent,” he said. “It’s like walking into a zone with a bunch of time bombs waiting to explode. . . . If you’re being treated like you’re nothing, like you’re a dog, an animal, and you’re not getting the right amount of food, water, you don’t have no way to use the restroom, the frustration constantly builds.

Thanks, Liliana Segura, “People Keep Dying in Mississippi Prisons but the Governor Wants to Move On.”

His thesis work is groundbreaking in that it may be the first instance of institutional-review-board-approved, inmate-on-inmate research. Brown will be interviewing inmates and looking for themes in the stories they tell about themselves in an attempt to understand the impact of stereotype, stigma, shame and humiliation on prisoner self-narratives and to determine whether these are barriers to reintegration into society.

Hopefully, this trend continues. Who better to tell the outside world about prison culture than prisoners themselves?

Hi there. I hope all is well. I am continuing the discussion I began back in 2013. Many things have happened in my life and career during that time. Even more, much has happened in the realm of the American carceral state. Some good, some bad, but mostly the same. I’d like to refer you to the very first post I made for this blog back in 2013 because most of those sentiments are the same. Scholars need to continue uncovering the history of incarceration, peeling away the layers to reveal the core of the matter.

I hope to help peel away those layers by sharing my own research as well as that of my colleagues in history, law, and other disciplines. Enjoy the ride! 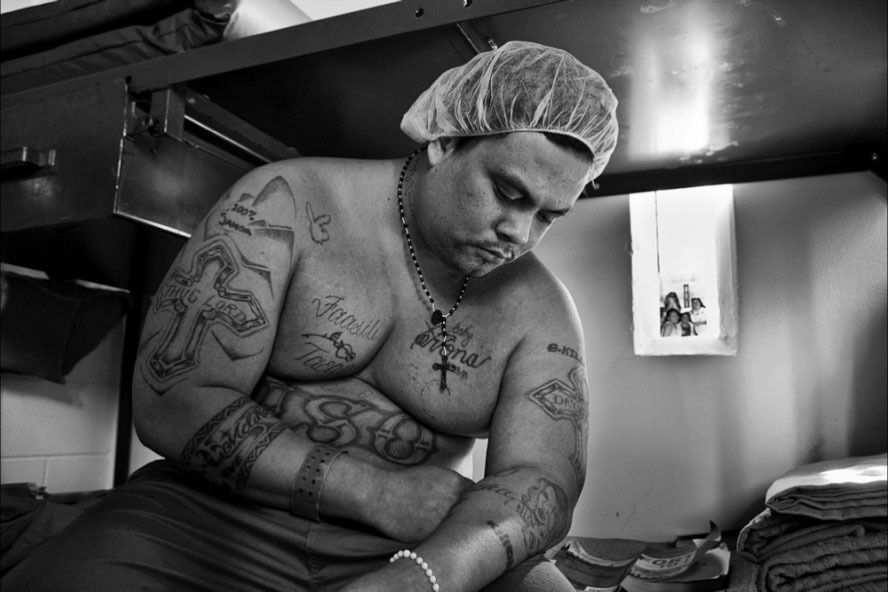 On show will be photographs from two projects — Gumpert’s ongoing Take A Picture, Tell A Story, and images from “I Need Some Deodorant. My Skin Is Getting Restless” which were made between 1996 and 2002 at the Alameda County’s Psychiatric Emergency Services at John George, Oakland. In both bodies of work, Gumpert uses oral history (audio and text interviews) to add description, depth and context to the experiences of his subjects.

If you’re in the Bay Area, I strongly recommend a trip through the Caldecott Tunnel out to Moraga.I’ve long been an admirer of Gumpert’s work, specifically Take A Picture, Tell A Story which is part of my curated effort Prison Obscura.

Prior to the public reception on January 25th, will be an hour long panel discussion…

From Nicole Flatow of ThinkProgress:

The report bolsters the notion that locking up the wrong people doesn’t improve public safety. In fact, “smart on crime” policies not only minimize punishment toward non-violent offenders; they can also re-allocate resources toward violent crime.

No big surprise here. The “tough on crime” policies of the 70s don’t work. 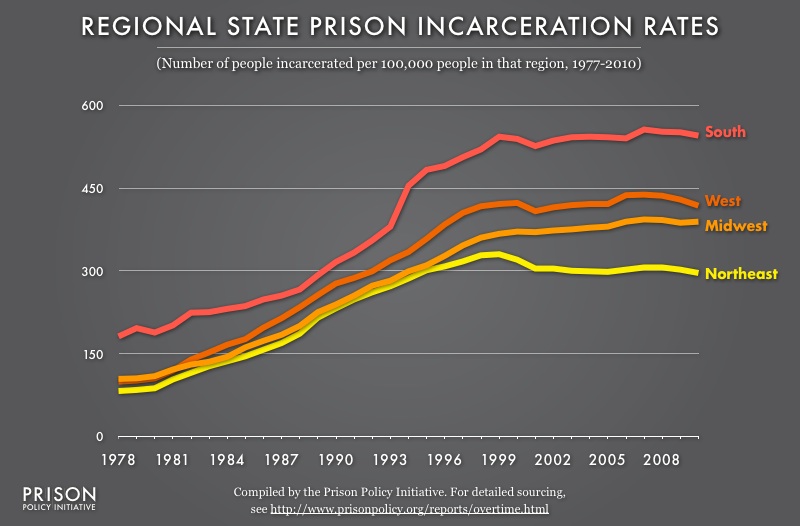 For the last 30 years, there have been clear regional differences in states’ use of the prison, with the southern states relying on the prison the most often. (See larger.)

The small, independent and incredibly effective Prison Policy Initiative (PPI) has delivered us a great service once more.

Not content with *only* filing lawsuits, pressing states to move away from Prison Based Election Gerrymandering; battling corrupt and expensive jail phone systems; and protecting prisoners’ rights to communicate unhindered by letter, PPI is committed to providing fellow prison reformers with accurate up-to-date data on mass incarceration. We cannot rely on the governmet to provide recent data.

“Until 2006, researchers, advocates, and policymakers could rely on state-level race and ethnicity incarceration rate data from the Bureau of Justice Statistics “Prisons and Jails at Midyear” series. Unfortunately, these state-level statistics have not been updated in eight years,” says PPI.

Well, our criminal justice system is not flawless. According to statisticians, a little over four percent of those sent to death row are innocent. In another unsurprising turn of events, United States Supreme Court Justice Antonin Scalia’s claim that courts are correct “99.973 percent” of the time is, well, wrong.

This specific study focused on death row. Death row presents a unique situation in terms of guilt and innocence. In around ninety-three percent of criminal cases, plea bargains are reached before a court even has to render a sentence. But death row involves much more time examining a case. Death row trials involve a bifurcated trial process. Death row trials often are subject to years and years of appeals. And even after all of this, 4.1 percent of death row inmates are most likely innocent.

The exception, the authors argue, is death penalty cases. Here, matters of guilt and innocence are examined in detail, often for decades after sentencing. Even though these cases account for less than 0.1 percent of the prison sentences in the US, 12 percent of the individuals who are exonerated after conviction were sentenced to death. So if we’re ever to have an accurate measure of the rates of erroneous convictions, this is the place.

The authors also note that even when a death row inmate is exonerated, his sentence is most likely converted to one of life in prison. This means that many who are exonerated will often end up serving the remainder of their lives behind bars. While the state will not directly put them to death, these convicted will die under its watch. These are the most likely innocent individuals that the study did not reach. Thus, the 4.1 percent number might in actuality be lower.

Read the original researchers’ paper at the Proceedings of the National Academy of Sciences of the United States. Thanks to John Timmer of Ars Technica for the find. 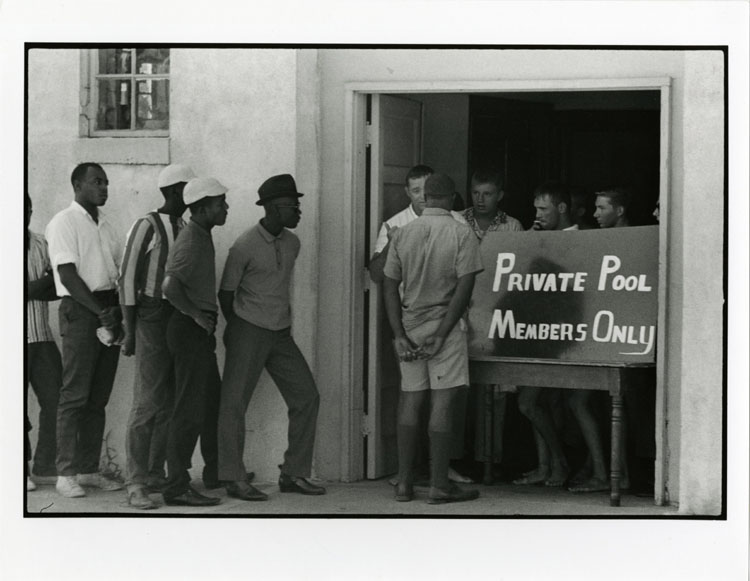 2014 is the 50th anniversary of the passage of The Civil Rights Act, the landmark legislation that prohibits discrimination on the basis of race, color, religion, sex or national origin.

Danny Lyon was the first staff photographer — between 1962 and 1964 — for the Student Non-Violent Coordinating Committee (SNCC). Lyon would go on to make some of the most important bodies of work about the American condition (The Bikeriders; Conversations With The Dead) and as such his very early work as a very young man is often overlooked.

May 4th, 2009. 9:19pm: Guards pushed down on Messier’s back, pressing his chest toward his knees, “suitcasing” him, a dangerous tactic banned in prisons. Image courtesy of Boston Globe.

The title of this post makes it sound like I’ll be making a habit of recording these stories of abuse. I will not — there are too many.

The title of this post is also the slightest of variations on the title of a post I published yesterday. Again, I want to reiterate that episodes of abuse (particularly behind closed prison gates) are not irregular. I simply don’t have the time to catalogue them all.

This week, two particularly glaring cases of state violence inside prisons were reported. The first is a return to a 2009 murder by Massachusetts prison guards. The second, a prison doctor in California sterilising female prisoners without consent.

GUARDS RESTRAIN PRISONER, STAND NEXT TO HIM…